Where did this feeling come from, she wondered. This warm, want-to-hug-people feeling?

She had never wanted to hug anyone before. As a child, she had been forced to hug every relative hello, regardless of who they were and how she felt. That was not OK with her. In fact, she hated it. But she did it dutifully. She learned to see hugging people as a chore and to bury any feelings involved in it.

But now…she WANTED to hug people.

People in her family.

People in her church.

People at her prayer meeting.

People who befriended her.

Even her pesky little sisters.

Where had this huggy part of her come from?

Then one day she read Romans 5:5. “…for we know how dearly God loves us and we feel this warm love everywhere within us because God has given us the Holy Spirit to fill our hearts with His love.”

Ahh! So that’s where it comes from, she thought! I’m so full of God’s amazing love that it oozes out of me every time I get near someone. I’m like some kind of slime monster!

And that was just fine with her.

She looked at the time again and frowned.  3:30  Finally on the road, she did the calculation. Two and a half hours would get them to the main beach at 6:00. Then 15 more minutes to get to the wedding sight.  The wedding starts at 6:15.

It will be tight, but we’ll get there before it starts, she thought.

Then the delays started.

Stop for gas. OK, so this delay was necessary, but it added 5 minutes to her time table. They might miss the beginning of the wedding.

Relax. God is in control.

She thought back on all the times she thought she’d be late somewhere. She had learned to trust in His timing – that He could handle circumstances and traveling times and make everything work out just fine.

Not this time, she thought as  they raced towards the beach. We have too far to go and there just isn’t enough minutes.

Besides, she didn’t know the exact spot the wedding would be held and was hoping to be able to follow someone who did. Now, they would be late and everyone would be at the wedding site. There would be no one to follow and they’d have to trial and error their way to the site. That would add even more minutes to the time table.

A while later, frustrated at having to slow down for traffic, she looked at the time again. 4:25. Her GPS told her it would take an hour and 40 minutes to arrive at the main beach. Adding the 15 minute drive to the wedding site, they would arrive at … 6:20. They would definitely miss the beginning of the wedding.

Not this time, she thought, tears squeezing past her stressed-tight eyelids.

The wrong turn was totally her fault. She had pointed out the turn to her husband only after they passed it. Then, after making a u-turn and getting on the road she had indicated, it turned out to be the wrong one. Having to turn around again, she fretted over this avoidable delay. If only she had paid closer attention to the street signs instead of relying on her memory.

Not this time, she thought as she mentally kicked herself. It was now 5:25 with about an hour still to go.

A phone call from her sister, checking on their progress and informing her that the wedding was running late, helped calm her a little. But just a little. They were still many miles from the beach. They kept driving.

Trust God to get you there at the right time.

Not this time, she thought. Even if they reached the main beach on time, everyone else will already be at the site and there still won’t be anyone to follow.

Staring out the window, she watched as they drove through unfamiliar streets. She and her husband had thought they should go a different way, but the GPS said to go this way. They decided to trust the GPS.

Not this time, she sighed with frustration. Even though the GPS had taken them a side way to avoid heavy city traffic and probably saved them 10 minutes, it was 5:45 and they were still 20 minutes away from the main beach.

You are in God’s hands. Trust in His timing.

Not this time, she thought. They’d probably get lost trying to find the actual site and end up missing the vows.

Another phone call a little while later, this time from her sister-in-law. They were just now leaving for the main beach and were willing to wait for her there so she could follow them to the wedding site.

Maybe, but we’re not there yet, she thought begrudgingly. It’s 5:10 and we still have to get to the wedding site.

After following her sister-in-laws car for several miles, they came to the parking lot closest to the wedding site. She was amazed to see everyone still milling around in the parking lot. The wedding hadn’t even started!

I told you – God’s timing is perfect.

As she got out to join the rest of the wedding guests, she said, “I’m sorry, Lord. You were right. I CAN trust Your timing.

“Will you go?” her boyfriend asked her. “You really should. You’ll love it and it’ll be good for you.”

“I don’t know,” she responded hesitantly. “There’s going to be a lot of people there.”

She didn’t know why she found it so hard to be around groups of people. Even going to the same prayer group week after week still caused her to get sweaty-hands-and-stomach-cramps nervous.

“But I don’t know anyone there.”

“You’ll make some new friends. Everyone is really nice.”

“They’ll tell you. The leaders are great. They will take care of you.”

“What if I can’t sleep in that room filled with women?”

Finally she agreed, and within a week she was signed up and on her way.

The first night was filled with introductions, expectations, and a short teaching. Not too bad, she thought. Even sleeping on her little cot went better than she expected.

The next day was so full of activities and teachings that she barely had time to think about being nervous. Everyone was so friendly and helpful, looking out for her and making sure she was OK. By that night she had begun relaxing and went to sleep full of the presence of God.

The next day brought a time of worship, a last message, and some group discussions. Then it was time for lunch.

While she ate, she marveled at the acceptance she felt from these ladies. No one was judging or criticizing her. No one was expecting her to be any different than what she was. It was even OK for her to be quiet and silent most of the weekend. She was so completely accepted just as she was. She knew after lunch would be the closing session and then it would be time to leave. She didn’t want to leave. She didn’t want to lose the warmth she had experienced all weekend.

A sound brought her out of her thoughts. Music? Where was it coming from? She noticed all the other women had also noticed and were looking around for the source. The music got louder and louder, and now voices could be heard accompanying the melody. Suddenly the door opened and in came a line of men holding lit candles while singing along with the music. And in amongst the men was her boyfriend! They made a ring around the women and sang to them.  Most women were crying by then, and she was no exception. Only her tears were on the inside. The men were singing to them! The men were singing to her! She was loved and cherished and valued! She was overwhelmed!

On her way home, she struggled to put her feelings into words, to form a picture of what the weekend had been for her. And then she knew! It was her welcome home party!

That’s exactly what it was, she thought. I left God when I was young, just like the prodigal son in the Bible. Only I wasn’t smart enough to go back home like the son was. The Father had to come find me. We spent the last year walking together  along the road back towards His home as He taught me about His love. And now, I’m surrounded by my brothers and sisters – all who love and accept me because He does! This weekend, like the party the father in the Bible threw for his son, was the party my amazing Father threw for me!

And she was grateful that her boyfriend had been right. 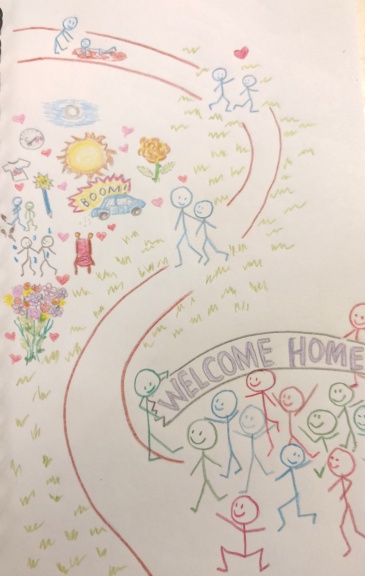 It was the first Easter after her encounter with Jesus and she was excited. Not just excited, but EXCITED. Jesus was alive! She had experienced His resurrection with Him during the previous week and was eager to celebrate His resurrection day.

As everyone went about their day, she told them the same thing. 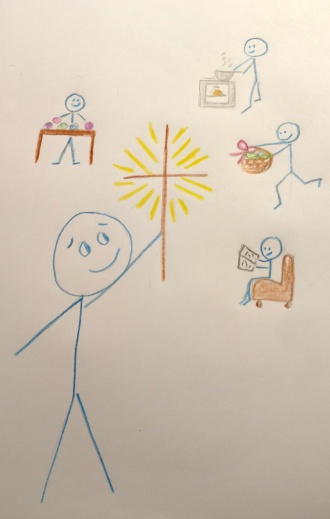 “Yes, I know,” her mom said as she cooked a ham with all the fixings.

“Yes, I know,” her sister said as she grabbed her overflowing Easter basket.

“Yes, I know,” her brother said as he spread out his goodies.

“I know.” another brother said as he looked through the TV guide.

But she knew they didn’t get it. To them, Jesus was more of a concept than a real person. They believed in Him, went to church to worship Him, prayed to Him, but they didn’t know Him. Sure, He was alive, but up in heaven where He’s watching them until He gets to come back. No reason to get too excited.

Disappointed, she spent the day with her family, celebrating bunnies and candy and family time.

The next year, she was anticipating the same thing. And her family proved her correct.

“I know,” her mom said as she brought down the Easter baskets from the attic.

“I know,” her sister said as she put plastic grass into each basket.

“I know,” her brother said as he dyed hard boiled eggs pretty colors.

“I know,” another brother said as he read the newspaper funnies.

They still didn’t get it, she thought. But someday they will.

On Sunday, after church and Easter baskets and family time, she left to go back to her house – a two hour drive. Halfway there, she stopped at a church hall to attend the prayer meeting as she usually did on Sunday evenings. She thought surely the people here would celebrate Jesus’ resurrection! After all, they knew Him just like she did.

And she was right! She had never seen them so happy, so excited!

“Jesus is alive!” said one person as he hugged her.

She watched in amazement as he left her to greet other people, dancing from one person to another. And he wasn’t the only person dancing! Everyone wore huge smiles, their faces almost glowing with their excitement as they greeted each other with “He’s alive!” and “Halleluiah!” When the meeting started, the praise and worship was longer and louder and deeper than she had ever experienced.

Thirty minutes later, she watched as the leader stood up to speak. “Jesus is alive!” he said to the group.

She shouted with everyone else, “We know!”