Voice One: a young girl, relatively new in the faith

Voice Two: the girl’s inner voice, whether her own or the Holy Spirit

Voice Three: the enemy (we all know who that is), sneaky quiet voice

Background: the young girl has been on a quest to learn about prayer in order to deepen her own prayer life 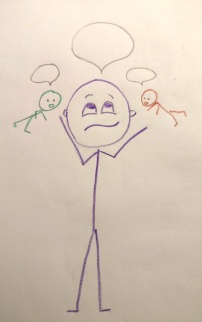 Voice One: Prayer often seems so empty and unanswered. What am I doing wrong? God, why are You so quiet?

Voice Three:  Where is your Jesus now?

Voice Two: He’s giving you a chance to grow in your faith. But He’s smiling down on you. He knows how this will end, and He is so proud of you.

Voice Three: You should have this by now. You’re not good enough to pray.

Voice One: I’m so sorry, Father. I wish I was better at this. Would You teach me? I’ve tried all week to have a quiet time, but I just don’t know how to.

Voice Three: See? Nothing. He won’t answer you.

Voice Two: That’s just the enemy. Don’t listen to him.

Voice One: Really? Satan is involved in this? Why? I’m nobody.

Voice Two: You are the daughter of the King. That makes you a target.

Voice Three: Nah. you’re no threat. Not worth Satan’s time. You can’t even pray.

Voice One: So if Satan can’t steal my soul because I belong to the Father, why is he after me?

Voice Two: He wants to keep you so busy worrying about your spiritual growth that you can’t enjoy life. He can’t steal your soul, so he’s trying to steal your joy.

Voice One: Hmmm… that makes sense.

Voice Three: NO! It doesn’t! Who cares whether you are happy or not? That’s just selfish.

Voice Two: If you have no joy, it’s hard to spread God’s love to others.

Voice One: So I should just enjoy who I am.

Voice Three: That’s just hiding your head in sand. You think if you ignore your problems, they will go away.

Voice One: So if I just focus on who I am, how do I grow?

Voice Two: Your Father is in charge of that.

Voice Three: That’s what they want you to think. It’s the easy way out. Growth takes work and discipline and plans.

Voice One: But don’t I need to work at it, make plans and discipline myself to follow through on them?

Voice One: Then how do I grow?

Voice Two:  Does a baby concern himself with how make himself grow? Or does he relax and allow his parents to be in charge? To lead him to what he needs – school, exercise, food – at the right times?

Voice One: I think I understand. I just have to enjoy being with My Father, and He will lead me at the right time into doing what I need to do to grow.

Voice Two: Uh, no. Cancel that request. You will leave her alone for now. Go!

Voice One: Thank You, Father, that You’re in charge and I don’t have to be. I can just relax and enjoy the life You’ve given me. You are amazing, God. There is none like You!