“Higher? If we go any higher we’re going to…” Amalia froze. He didn’t really mean that, did He? This was supposed to be a restful ride, nothing scary. She stared at Him, unable to voice her fear.

His eyes twinkled back at her. “Yup. And you’ll love it. So do you want to go higher with Me?”

Nodding slowly, she knew she’d go anywhere Jesus wanted to take her. She wasn’t sure if He meant the same thing she feared, but just in case, she held on tighter. If this helicopter broke free and went off into space, she wanted to be ready.

The small helicopter thus far had been moving in a slow, mechanical way. Although she controlled the up and down movements, the long metal bar to which it was attached kept it from going too high or too low as it revolved around a center column. It kept her safe from dangerous extremes. Now Jesus spoke of going higher. Heart beating faster, she waited to see what He meant.

He took the controls, and they began climbing.

At first nothing seemed to change.. She looked at Jesus and waited. When was He going to do His thing? Something totally unexpected and crazy and marvelous? But they just kept rising and revolving as they had been doing since they got on this ride. Should she ask Him about it? Or should she keep quiet? Maybe He’d forget and they could just finish the ride in a safe and ordinary way.

A few minutes passed. They were still rising.

She looked at Him again. The smile on His face was bigger, brighter, and more joyous than she had ever seen. Not just His smile – his whole body seemed to be brighter, reflecting the light that streamed down on Him.

No, not just on Him, on both of them.

Wait… the light was not streaming down on Him. It was streaming out from Him. He was the source of the light, which was growing more brilliant by the minute.

She was about to say something, but he stopped her.

“Shhh. Just take it in.” He whispered.

She sat back, noting that they were still rising, and let her eyes wander as she focused on the light’s sensation. The warmth she expected. But there was something else about it, something she couldn’t quite identify. Something good. Like she was being hugged from the inside out with the longest, most passionate hug she’d ever experienced. Tears filled her eyes as she surrendered to the embrace.

Too soon, she heard Jesus whisper. “Amy, Me beloved, look down.”

She did, and gasped. The amusement park looked the size of a flea circus.

“We’re so high! How…?” She shook her head. She didn’t’ need an explanation. Jesus had done His thing.

“This is how great My love for you is. And even greater. When you go through rough times, remember what you’ve experienced today. My love will be just as great then as it is now.”

The love, still flowing through her as she stared at the tiny rides below, filled her so completely that all she could do was nod. Slowly, as they descended, the light’s brilliancy dimmed to ordinary light. Disappointed, she tried to hang on to the inner embrace, but that feeling was also slowly fading away. By the time they joined the other helicopters, still revolving around the center column, it was all but a memory. A memory she was going to hang on to as long as she could.

Has anyone else experienced the loving embrace of God? What was it like for you?

Psalm 103:11  For as high as the heavens are above the earth, so great is his steadfast love toward those who fear him;

1 John 4:16  So we have come to know and to believe the love that God has for us. God is love, and whoever abides in love abides in God, and God abides in him. 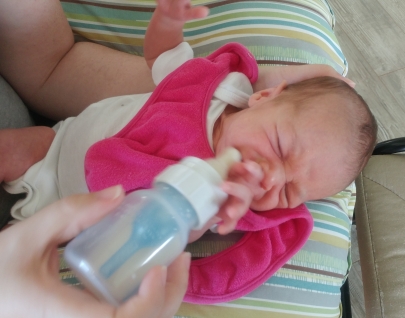 Why do you keep pushing me away when it’s my hand that holds what you want?  I can see how hungry you are. I know what you want and I want to give it to you. But you are the one stopping me. All that hitting and flailing out prevents me from doing what we both want.  I can keep battling your efforts to do it yourself but it would be so much easier if you would just relax and let me do for you what you can’t yet do for yourself. Oh, and those screams are not helping. Be still, Little One, and know I am here, ready to feed you as soon as you let me.

For He satisfies the thirsty and fills the hungry with good things.  Ps 107:9

These letters have double meaning. On the surface they are letters I’m writing to my granddaughter. But they are also letters God is writing to you. Reread them, replacing the greeting with your own name, and the closure with God’s name – and get to know the great love God has for you!