Emotions churned inside her as she bowed before the Lord in prayer.

“Jesus, I don’t know what’s happening inside me. It’s such a mess. And I don’t even know why. Everything seems to be going well right now – job, family, health. So why all this turmoil?”

“Just a little cleaning up.”

She frowned, not understanding. How can cleaning up make her feel bad? She thought about it for a while. What exactly WAS she feeling? So many emotions all mixed up inside her. Pain and confusion from her teen years that still plagued her. Doubts that she was actually hearing from God and that it wasn’t just her imagination, and fear that she would lead others wrong as she began speaking out for Him.  Depression that seemed to cling to her no matter how hard she tried to fight it.  Very low self-esteem, more like no self-esteem.  The list seemed endless. She struggled to put a name to it.

She thought of her small garden pond. She enjoyed going outside to sit by it each day and watch the fish swim around. The pond looked beautiful – clear shiny water with green flowering plants growing in and around it. From time to time she would add a little water to compensate for the water that had evaporated.

She remembered a time she had not gone outside to the pond for several weeks. When she had finally made it there, she had been dismayed to find the water level to be as low 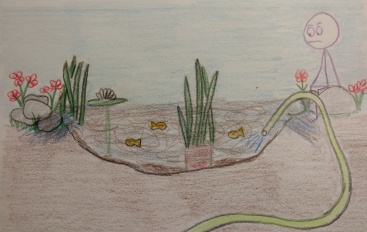 as it was. So she had taken the hose and watched as the water refilled the pond. Almost immediately the clear water had gotten cloudy as the running water churned up the dirt that had settled at the bottom.  Within minutes she could see leaves and pine straw swirling around in the very muddy water. Yuck. She decided to keep the water flowing and as the water flowed over the top, it had taken the mud, leaves and pine straw with it until all that had remained was clear clean water. Her pond was beautiful again, only this time it wasn’t hiding a bunch of dirt and debris at the bottom.

She made the connection. She might look good on the outside, but deep inside her heart,  a lot of dirt and debris had settled over time. Jesus had turned on the hose in her heart, filling her to overflowing with living water!

Amazed at the way He helped her understand, she thanked Him for the work He was doing. It might not look so good at the moment, she thought, but when He gets done, my heart will be clean and clear and truly beautiful!