As she walked down the sidewalk one warm sunny afternoon, she noticed a worm. Most of the time the worms by that time of day were dead and shriveled up. But, amazingly, this worm wasn’t. It was still alive and heading away from the nearby edged lawn. But she knew that if it continued on its path, it wouldn’t make it to the other side. Between the hot sidewalk and the hungry birds, it didn’t stand a chance.

So, having compassion for it even though it was just a worm, she carefully nudged it with 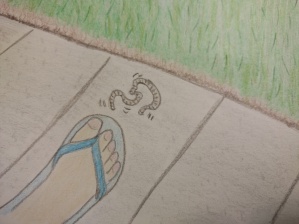 her foot towards the cooler damp dirt under the grass only inches away. It should have been easy. It was only a few inches and she was way stronger than the worm. But as she touched it, it went crazy. Twisting and turning wildly, it probably thought it was in danger and tried to protect itself. However, instead of the wild movements taking it closer to the dirt, it ended up right back where it started. She nudged it again, and again it wiggled wildly and landed back where it started. This is taking longer than it should, she thought. If only it would just let itself be nudged, it would already be safe in the dirt.

She considered her choices.

Quit scaring the little guy and let it take its chances on the sidewalk.

Or ignore its wiggling and use more force until it gets to the dirt.

Making her choice, she positioned her foot and scooted the crazy wiggling jerking worm all the way to the dirt. As soon as it touched the dirt, she removed her foot and watched it calm down.

There, she thought. You may not understand why you were being forced like this, but it was for your own good. Now you’re safe and can go on about your business.

As she continued her walk, a thought crossed her mind. How many times has she reacted like the worm when God nudged her into a different direction?

“God, next time You nudge me, remind me of that little worm. I don’t want to fight You or make it take longer than it needs to be. Help me to trust that You know best.”