“I think God is telling us to tithe,” I told my husband. “OK,” he replied. And we did. Except we started with 5% instead of the 10%. Finances were extremely tight and we weren’t brave enough to give more.

Three things you should know before I continue.

First, we were living at the time in a cramped two bedroom trailer with two small
children and a dog. Our nine year old daughter had one bedroom, and my five year old son shared the master bedroom with my husband and me. When we bought the trailer, the plan was to live in it for five years then buy a house. Now it was ten years later and we were no closer to buying a house than when we bought the trailer.

Second, I was the one who managed our family finances. I paid the bills and watched our bank account dip into the red each month. Credit cards became our best friend. So I KNEW we couldn’t afford a house. No way!

Third, at that time we were as spiritually challenged as we were financially challenged. We had been strong not many years before this – attending church and prayer meetings, reading the Bible, listening to teaching tapes, and reading books – but one by one these things fell away until we were doing none of it.

A month or so before I approached my husband with the idea of tithing, I had felt God’s call to come back. I began reading the Bible daily again and eventually came across God’s challenge in Malachi. This is how I read chapter 3, verses 8-10: 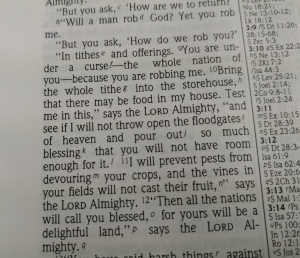 “Yet you rob me. But you ask, ‘How are we robbing You?’ In tithes and offerings. You are under a curse… because you are robbing me… test Me in this,” says the LORD Almighty, “and see if I will not throw open the floodgates of heaven and pour out so much blessing that there will not be room enough to store it.”

I felt convicted and knew I had to do something about this. That’s when I went to my husband, who simply said OK and continued playing his computer game. Simple for him, I thought. He’s not the one who has to juggle the finances.

The next month I made the first contribution. Not to a church since we were not attending one, but to a couple of ministries that I had heard about on TV. Four months later, January of 1996, my husband, out of the blue, announced it was time to buy a house. Yeah, right. But we went looking anyway. I told him we needed to stick to under 100K. After weeks of not finding anything we liked, the realtor told him about two houses, each around 150K. To humor them, I agreed to look at them.

We named the first house the White House because, although it wasn’t white on the outside, everything inside was white – the walls, the cabinets, even the carpeting. As we drove away from it, I pushed the button to lower the side window of our minivan so I could take a picture of the house as I had done with all the previous houses. Only this time the window wouldn’t go back up. I froze all the way home, worried about how to pay to have the window fixed. But the next day the window worked find. In fact, the only other time it ever got stuck was when we looked at the other 150K house.

Praying about it with some friends, we interpreted the open window as God’s way of saying we had an open door to either of those houses. Our pick. We chose the White House because I had always wanted a two story house. Lots of space!

It took a few more signs from God (dream, prophetic word, and a scripture) to convince me to trust Him but a month later we were signing the papers! The realtor commented that he had never seen a sale go through as smoothly and quickly as this one had. We used all our savings (money we had put aside each month for the summer months as, being educators, we didn’t get paid in the summer) for the down payment. My dad agreed to loan us money to make it through that first summer.

I LOVED the house, but still continued to worry about finances. Each month I thought making the mortgage payment was going to put us under – but it didn’t. Not only did we have enough to pay the bills and to treat the kids to kid meals from time to time, we even had enough to put some in savings for the summer. By June, we had enough in savings that we didn’t have to borrow any money from my dad! To this day I can’t figure it out because we really didn’t change our lifestyle and we weren’t making any extra money. Somehow God had stretched what we had to make it enough!

I learned two things from this.. God is my provider, and God is faithful. He made a promise and kept it.

3 thoughts on “I Think We Need to Tithe”