She managed to control her nerves by not thinking about it. At least she tried to. But as the weekend drew nearer, she found herself thinking more and more about the coming Sunday night. Driving through an area she’s never been to was not a problem for her. But meeting a group of strangers by herself was usually scary, and meeting this group of strangers was, for some reason. downright terrifying.

She considered that thought. What if they were totally different than her, than what she was used to? And she sticks out like a sore thumb?

Maybe she shouldn’t go. Just not show up. No one would care. They probably already forgot that she had called. No. God led her to this group. If God wanted her there, then it’s got to be OK. She pictured herself there, strangers all around her – but also God there with her making it OK. No, she wouldn’t back out.

“They’re going to turn out to be a bunch of crazy fanatics. Jumping up and down, running all over the place, making weird noises. And when they pray for you, they’ll put their hands on you and yell prayers at you until you fall down. They’ll even try to make you do all those crazy things with them.”

What if they were weird? Really weird? She had read about some cults. What if they tried to make her do something she didn’t want to do? What if they got really crazy? Would she be able to get up and leave or would she be forced to stay to the end? Fear rose up in her. She began to think she couldn’t go through with this.

“Forget about going. That’s the smart thing to do. You don’t need to take this risk.”

She thought maybe she should just wait until she found another group. A safer group. But she couldn’t deny how God had led her to this group. God knew her, and He wouldn’t lead to a place that wasn’t good for her. She decided to trust in His guidance.

“By the time the meeting is over, it’ll be late and you’ll be tired. Maybe too tired to drive the hour it will take to get home.”

She pictured how Sunday night would go. She’d drive the hour from her parents’ home, arrive at the meeting at 7 PM, the meeting would last for 2 hours, then about half an hour of fellowship, so she’d probably be back in her car by 9:30. Another hour to drive home would get her there around 10:30. Add the time change, and she’d get home… wait…  it would be almost midnight before she got home! Not only would it be a long drive home, but she had to get up early the next morning for work!

“It wouldn’t be fair to make your work suffer because you’re tired from going to bed so late. This meeting is just held at the wrong time for you.”

She thought how her work always suffered when she was tired. She couldn’t attend these meetings. It wouldn’t be right. Relief in having a good excuse not to go this Sunday night began to wash through her but was stopped when she remembered again how she had prayed for a group and this is the one God led her to. He knew what was best for her. She would go this Sunday and trust Him to handle the tiredness issue.

“They aren’t going to like you. In fact, they aren’t even going to be friendly.”

What if she went in there and they ignored her? What if they didn’t want her there? She should just forget it. Why take the risk of being somewhere she wasn’t wanted? But then she remembered how friendly Pat had sounded, how excited Pat had seemed. If the group was as nice as Pat, it will be fine. She could do this. She would do this.

Sunday night finally arrived. She drove slowly towards the church. Her heart was pounding, her hands sweating, and she began to shake as the neared the church.This was too hard. She couldn’t do it after all. She drove past the church and headed for home. But after a few minutes, she turned around and headed back to the church. She had to do this. There was no other way to meet her need to worship. 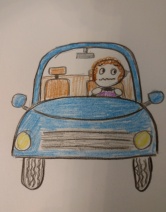 She slowed down and pulled into a parking space. Her hands touched the key but stopped before turning the car off. She sat for several minutes, watching people enter the church, before she could make herself shut off the engine. It was several more minutes before she managed to open the door and get out. She felt sick, her stomach all twisted into a knot. She could still turn around and go home. It wasn’t too late. No one had seen her. But even as those thoughts came, she knew she was going inside. Her desire for God outweighed her fears. She walked up to the door, opened it, and taking a deep breath, she went inside.

As she entered the hall, she immediately noticed two things. The cheerfulness of the light and the joy on the people’s faces. Some stood in small groups talking with each other, others were leaving by a back door. A few walked by her, talking about Jesus as if He was right there. She stood there uncertain of what to do. Where was Pat? She said she’d meet her at the door. But no one came.

“They don’t care about you. Pat changed her mind and won’t come meet you. They’re all ignoring you because they don’t want you here.  You should leave now before it gets worse.”

As the hall slowly emptied, she become increasingly uncomfortable and considered her options. Follow the people out the back door to wherever they were heading and risk being rejected when they see her? Or go back to her car and go home where everything was familiar and safe? She had just turned to leave when a voice called out to her. A lady hurried over to her and introduced herself as Pat, apologized for not getting there sooner, and explained the meeting was about to start in the church.

She followed Pat through the back door, down a sidewalk, and into the church. Music was playing and everyone was clapping as they sang along to the lively music. She found a seat in the back and sat down to watch. During the next few songs, some people left their seats to dance in the aisles, one man coming to sit by her momentarily before dancing off. Feeling welcomed by the smile the man had given her, she began to sing. After a few more songs, the music slowed down and the people raised their arms and began to worship Jesus. As she joined them, a sense of God’s love and of being home washed over her. And she knew that all she had gone through to get there was worth it. She raised her heart in thankfulness to the amazing God who had answered a simple girl’s prayer in such an amazing way!