She sat in the rehab room watching her dad pretend to be sleeping. After five hours, she was tired and bored. Other than a few breaks, when her dad had left for therapy and when he returned, and when her sister had called, she had sat in the not quite comfortable chair and played games on her iPad while he did his daily computer tasks then slept. Now it was dinner time and she was all gamed out. Not having anything else to do she decided to call God. 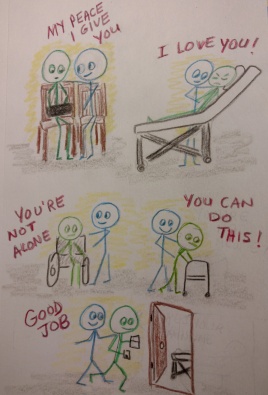 “If I could see You, right here in the rehab, what would I see?”

“You would see a man, bending over your dad, whispering words of love, and waiting patiently for a response.

You would see a man, sitting next to you, covering you with strength and peace as we keep watch.

You would see a man, walking up and down the hallway, greeting the residents with encouraging words and gentle hugs.

You would see a man, standing near the employees, arm across their shoulders. providing support and wisdom as they need it.

And you would see that man doing all those things at the same time for I am not limited by time or space.”

Wow! What an amazing God!

Yet how many of those people know that He is doing all that, she thought. Especially those who don’t know Him yet? Hmmm… maybe that’s where she comes in. Maybe she should show them by doing  physically what God is doing spiritually. After all, that’s what Jesus did while He was on earth.

So maybe, she thought, she should change her question a little.

“Hey, God! Will You show me what You are doing so I can do it too?”

And they both smiled.