“We’re back!” they said with evil glee.

“Oh no!” she said. “Not now! The kids are here and there’s no one to cover for me! Can’t you just skip me this month?”

“Then come back later, after the kids have gone home.”

“Aw… one would think you didn’t like us,” they said, pretending to be hurt.

“I don’t. You’re timing is terrible.”

All that Friday morning, as she took care of the kids she babysat in her home, she could feel her abdomen tightening in anticipation of the intense pain that usually accompanied these visitors each month. And she could hear them taunting her. 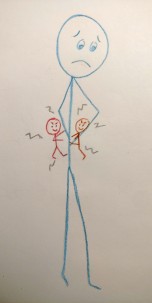 “You’re going to scare the kids when you get sick right in front of them.”

“Feel that? It’s only going to get worse!”

“You may as well as give up. We’re going to be here a long time.”

At noon, she took some pain reliever and prayed, “Jesus, please bless these pills and make them work for me.”

“No! Not the pills!” they cried in mock horror. Then they scornfully laughed at her. “Those pills can’t even begin to touch what we have in store for you today.”

After settling the kids down for their naps, she sat down and held her abdomen. I don’t know what to do, she thought. What will happen if I can’t take care of the kids when they wake? And what about the after-school kids coming later this afternoon?

A small thought made its way into her brain. “You don’t know what to do, but you know Someone who does.”

Of course! Why didn’t she think of that sooner? She placed one hand flat on her abdomen and raised the other hand towards her Healer.

“Wait! What are you doing?” they asked nervously. She had not done that before and it looked a lot like a prayer position to them.

Then she closed her eyes and began speaking. “Jesus, Lord of all creation, You made me and You know how my body works. Please hold back these cramps from me while the kids are here. And while I attend the football game tonight. After that, it doesn’t matter. If the cramps have to happen, I’ll be able to spend the day in bed tomorrow with them.”

Then after a moment, she added, “But I can’t promise not to complain or ask You to take them again if You allow them back.”

“That won’t work. He doesn’t care about a little bit of cramping,” they jeered.

“He cares about everything I care about.”

“Your prayers don’t always work. They’re not going to work this time either.”

“Not if we have anything to say about it,” they said as they became more active – pulling and pushing and twisting inside her.

Finally, she couldn’t stand it any longer and decided to lay down to see if that would help.

“That’s right,” they said. “Get ready for some fireworks! We’re just getting warmed up!”

Their taunts grew louder as her cramps intensified.

“You’re going to get so sick, you won’t be able to take care of the kids.”

“Yeah, they’re going to get up and destroy your house.”

“And maybe ever get hurt.”

“And then their parents are going to be so angry you took a nap and neglected their precious children that they will never bring their kids to you again. You will lose everything!”

And they laughed their evil laughs, enjoying their own imaginations.

“Oh no! She’s praying again. Let’s see if He hears her this time.”

“I don’t know why these cramps are still here. I place them in Your hands. Please don’t let me fall asleep as I lay here.”

“No problem,” they laughed at her as if she was speaking to them. “You’re going to be hurting too much to fall asleep.”

“Thank You, Lord,” she continued. “Thank You for these cramps, for they show me that my body is working.”

“That’s a new one,” they said as they looked at each other. “This can’t be good.”

They looked with bewilderment at each other. Something was happening. Something they hadn’t experienced with her before. They were shrinking right before their own eyes!

A little while later, she roused.  After making sure the kids were still sleeping, she checked on the cramps.  She couldn’t feel them. Were they gone? How could that be? Every month in the past, they would hang around for a day or two. How could they be gone in just thirty minutes?

“Oh. Right. But I can barely feel you. You’re too little to do much. Jesus sure took care of you!”

“Just wait until next month. We’ll be back!”

“Bring it on. Jesus will still be here next month!”

And she spent the rest of the day singing praises to her amazing Healer-God!

3 thoughts on “Let the Cramping Begin”