She watched the storm approach from the east. Dark clouds rushing towards her, getting darker by the minute. She could hear the thunder in the distance. 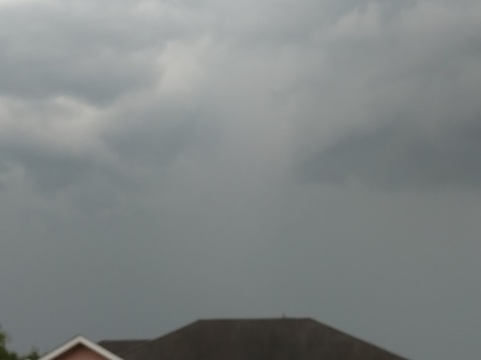 “This is going to be a bad one,” she said to herself. “Better get inside and prepare.”

She was used to storms coming and going, but most weren’t this dark, or with thunder this loud. This storm was going to be intense, maybe even have dangerous winds and lightning. And if enough rain fell, the streets might even flood keeping her stranded at her house until the water level went down.

She ran around her house unplugging anything that didn’t need to be plugged in. She made sure she had good batteries in her flashlights. And she turned up the radio to mask the sound of the thunder for her dog who was terrified of storms.

The dark clouds continued to move westward until they were above her. She turned on the lights in her house as the clouds caused everything to be darker than it should have been at that mid afternoon hour. She made her dog comfortable at her feet.

Hearing a few raindrops, she looked out the window. Yes, the rain was just beginning, although it was mostly just sprinkling.  She began imagining the rain falling harder until it fell in sheets, drenching everything, and flooding the yard. She imagined the wind blowing hard enough to knock over her old rotting fence. She should have taken care of that months ago. Now it was too late. Now her dog is probably going to get out of the yard before she could get it repaired. Or worse, something could get in and attack them. She had heard that there were coyotes in the neighborhood. She even imagined a tornado hiding in the storm clouds and coming down just as it got to her house, destroying everything and endangering her life.

Nervous now, she looked at her dog buried under at blanket at her feet and wished she could join him. How nice it would be to hide from this storm. To pretend it wasn’t coming. But that wasn’t possible. Even if she could hide, she’d know it was happening and not being able to see what was going on would be worse than not seeing.

So she looked out the window again and was surprised that the sprinkling had stopped. And where was the wind? There had been no wind. Yet, she reminded her herself. Surely it was still coming.

And she continued to wait.

After a while, she noticed the thunder was not as loud as it had been and that the sky was lightening. What happened to the storm? She walked outside and looked up at the sky. The dark clouds were now on the west side of her and receding into the distance. Light was breaking through the remaining clouds.

She looked at her car. Just some drops of water. Not even enough to wash off the pollen.

No drenching rain. No flood. No wind damage. The storm had looked way worse than it actually was. She hadn’t needed to fear after all.

She remembered Ps 23:4 “Even though I walk through the darkest valley, I will fear no evil, for You are with me.”

Well, she thought. This wasn’t a dark valley, but it did get pretty dark.  I think it’s safe to paraphrase this.  “Even though I wait as the darkest storm approaches, I will fear no evil, for You are with me.”

Then she had another amazing thought: Just like the storms in my life, many look worse as they approach than they actually turn out to be.  But not matter how scary they look, I need not fear for God is with me.

4 thoughts on “The Storm That Never Was”