“I was so close,” she thought with disappointment as gravity pulled her away. “Why can’t I just stay here where things are so much clearer? Why am I always pulled away?”

Helplessly she watched the sky grow further away, then disappear as the angle of her 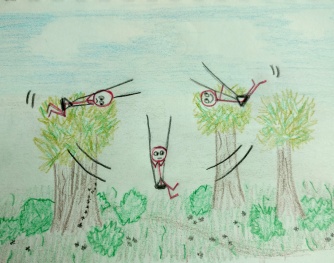 body changed. Her vision now was filled with overshadowing trees, prickly bushes, weed-invested grass, and dirt crawling with bugs – the everyday mixture of good and bad she was very familiar with. Although she could no longer feel as if she was part of the glorious sky, she could still get a glimpse of it if she looked up. But the land around her was interesting in its own way and thoughts of it slowly crowded out the sky from her mind.

She didn’t get to stay there very long. She was pulled back up, this time backwards where all she could see was the ground receding from her. The dark, flat view that filled her eyes replaced the memory of the wide open blue sky and began to make her question if that blue sky even existed. “Did I just imagine it?” she wondered. “I can’t see blue sky anywhere around here. It must have been just wishful thinking.” However, in spite of the sad feeling that accompanied that thought, she was surprised how the distance provided her a new perspective on what she thought she knew so well. Like how little those bugs really were, and how the weeds seem to disappear into the greenness of the grass.

Just when she accepted her new vision, it changed.

“Arhh!” she screamed as she fell facedown towards the ground. “Not again!” Visions of smashing into the ground filled her mind with anxiety. As the ground loomed larger and larger in her sight, she just knew this time there was no way she was going to come out of this unhurt. With hands clenching on tight, she closed her eyes and began to pray.

But when the impact didn’t happen, she took a peek through one eye and saw she was not going down anymore. She was moving sideways and missing every obstacle. “Whew”, she said to herself. “I don’t know how, but I made it again.” Relief flooded her and she drew in deep breath and relaxed as her familiar world surrounded her yet again. Then in her peripheral vision, she got a glimpse of blueness above her and something in her spirit stirred. Looking up she was reminded of the things she had seen before and a longing rose up in her. How could she make her way back up there? And if she did, could she get high enough to stay there? She strived to push herself upwards but that didn’t help, and neither did wildly kicking her feet. Eventually she gave up.

Before long, though, she noticed everything began to seem brighter and she got increasingly frequent glimpses of the blueness above her. Her angle continued to change until all she could see was the bright blue sky and awesome white clouds. And once again everything seemed so peaceful and clear to her and she wanted to stay there forever.

But of course she couldn’t, and gravity pulled her back down again and she started the cycle all over.

“Wow, that was amazing!” she said as the ride stopped and she got off.

“Swinging like this has its ups and downs,” she thought. “Just like my Christian life. Sometimes I get so close to God and seem to understand everything so much clearer, but then that feeling fades away as days go by and I find my vision limited to what I can see down here.”

Then she had another thought. “There is one big difference. This swing may always come back down, but one day, I’m going to make it up into that spiritual sky and never come down!”

2 thoughts on “The Swing”