Was it a cavity? Did she need to have a tooth pulled? Braces? She didn’t know. She just knew there was something wrong with her teeth. They didn’t hurt, but she could feel something was off.

She had tried everything she could. Brushing, flossing, rinsing – nothing seemed to help. So she decided to take the next step and scheduled an appointment with Dr. Worldlee. Dr. W was considered the best around for his expertise and patient care. Surely he would be able to fix the problem.

The next week she was nervously sitting in the chair, white napkin clipped around her neck, waiting for Dr. W to arrive. A glance around the room revealed an assortment of posters advertising treatments for different tooth problems. She had had to bring her baby when the babysitter cancelled at the last minute and could hear him through the open doorway, babbling with the receptionist.

“Good morning!” Dr. W said cheerfully as he walked through that doorway. “How are you today?”

“Relax. It’s going to be OK. You’re in good hands,” he said as he glanced at the x-ray on the computer monitor. “Hmmm….”

“Hmmm?” she asked, her eyes getting big. Hmmm’s are never good.

“Oh, not to worry. It seems your x-ray shows something is off, but not in enough detail enough to show me what it is. But I know what will give me that information.” He opened a cabinet door and pulled out a dark jar. The label was too small for her to read so she watched carefully as he opened it. He reached inside and wiggled his hand a little. When he pulled his hand back out, there were several brown bug-looking things crawling on it. He plucked one off, then shook the rest of them back into the jar, replace the cover, and returned the jar to the cabinet. With the bug still grasped with his fingers, he approached her.

“Open up,” he said. “This will give me more information.” 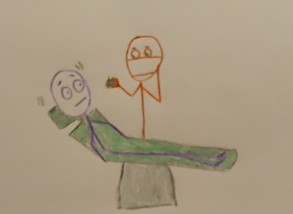 Clamping her mouth shut, she shook her head. She had heard of this “treatment”. After swallowing it, that little bug would burrow itself inside her in order to provide more information which would be displayed on the dentist’s computer. But she had also heard that that wasn’t the only information the bug provided, and that once a bug was inside a person, it frequently led to more complications which sometimes became life threatening.

“Don’t worry, it doesn’t bite,” he reassured her. “You probably won’t even feel it.”

She shook her head again. “No, thanks.”

“You really need to,” he said, a bit more seriously. “Everyone does, sooner or later.”

She tried to get out of the chair, but the dentist pushed her back down as he motioned to someone outside the room. She knew he was recruiting help. One way or another, by cajoling or by force, she knew he was going to get that bug in her mouth if she stayed in that chair. But how could she escape?

“Wait!” she cried out, keeping her teeth clenched together. “I’ll do it. “But.. But…” She tried desperately to come up with a logical reason to leave the room. “But I need to go get some water first.” She motioned to the water fountain behind a large lady making her way towards them.

“You don’t need water. This will just glide down your throat.”

“Yes I do. I have a very strong gag reflex. I have to have water to swallow anything or else I will just throw it back up. It will just take a minute.”

“I’ll get you some water from this sink.”

“No! I mean no, I need the water to be cold. Like the fountain water in the waiting room.”

He looked suspiciously at her but agreed to let her get up. She walked to the fountain, pulled out a cup, and began filling it. As she did, she glanced at the front desk to check on her baby and gasped. He wasn’t there! Where was he? What did they do with him? Then she heard his cry. It was coming from the little room she had just exited. She threw the cup down and ran back into the little room in time to see the dentist attempting to put something in her son’s mouth. She knocked it from his hand, grabbed her son from the receptionist’s arms, and ran from the room. She made it all the way to the front door sighing with relief as she reached out to push the door open. But before it opened, the large lady grabbed her and began pulling her back towards the little room.

She shook her head, keeping her mouth tightly closed, knowing if she didn’t, he would take advantage of any opening he saw. She looked around for help from the other people in the room, but they were pretty much ignoring her. Those that watched seemed more interested in watching the drama than in helping her.

All of a sudden, her baby let out a scream. Startled, she turned her head just in time to see the large lady’s hand move away from the baby’s arm and the dentist slip a bug in his mouth. She quickly stuck her finger in the baby’s mouth, pried the bug out, slung it to the floor, and stomped on it. Picking up her foot, she saw the bug still moving so she picked up a nearby statue – a really heavy one – and smashed it down on the bug. Then she raced for the door, got it open, and escaped into the fresh air outside.

The last thing she heard before the door closed behind her was, “That won’t hurt it. You can’t get rid of it that way.”

She ran to her car and tried to unlock the door but the baby was struggling to get down and she dropped the keys.

She jumped. It was Dr W! He had followed her outside. She tried to back away but he apologized again. “I’m sorry. I didn’t mean to upset you. I was just trying to help. Here, let me hold your son so you can get the keys and unlock the door.”

He wasn’t holding anything and sounded so sincere that she agreed and handed her baby to him. She bent down to retrieve her keys, inserted one into the lock, and turned it. As she heard the click of the door unlocking, she turned back to the dentist and her son just in time to see Dr. W hold a syringe full of a brownish liquid above the baby’s eyes. As quickly as she could, she knocked the syringe from his hands, but not before he was able to hit the plunger. The baby wailed as the brownish liquid filled his eyes.

She grabbed him from the dentist and ran back inside to the water fountain and began filling and emptying cups of water into the baby’s eyes. After a few minutes, the baby calmed and she stopped splashing to look at it. His eyes were red and swollen.

She walked back outside where the dentist was still standing near her car. She yelled, “Now I’m going to sue you! Just wait until you hear from my Lawyer!”

He answered softly, “I don’t understand your resistance. I was just trying to help.”

“Yeah, right,” she said angrily. “You call that help? Your kind of help just makes everything worse. I’m going to the One who can really help. A real Healer.”

After securing her son in his car seat, she got into the driver’s seat and turned on the car engine. She had to get to the Doctor as soon as possible. No telling what damage had been done to her son’s eyes. But she knew if she got there soon enough, the Doctor would know how to heal it.

This Doctor knew how to heal anything. And no need to make an appointment. He was always available.

She smiled. Yes, the Doctor would know what to do. If only she had gone to Him first. So much distress could have been avoided. Well, next time, she vowed, she would.

9 thoughts on “You Call That Help? (from a dream – totally symbolic)”

© 2017-2019 Linda Schnepel and Amazing God Stories. Unauthorized use and/or duplication of this material without express and written permission from this site’s author and/or owner is strictly prohibited. Excerpts and links may be used, provided that full and clear credit is given to Linda Schnepel and Amazing God Stories with appropriate and specific direction to the original content.