The following is my interpretation of Psalm 23 that David may have written, if he was alive today…

The LORD is my Governor, I shall not be misled.

He makes me stay put in stocked rooms.

He leads me along quiet streets, He restores my soul.

He leads me in ways to be helpful, for His name’s sake.

Even though I walk through a time of widespread pandemic,

I will fear no virus, 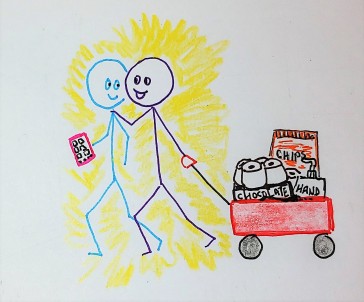 For You are with me;

Your Word and Your right arm, they comfort me.

You prepare a feast before me, on the screens of my mobile devices;

You set me apart; my peace will be unshaken.

Surely good things and Your steadfast love shall follow me all the days of this quarantine,

And I shall enjoy God’s presence each day. 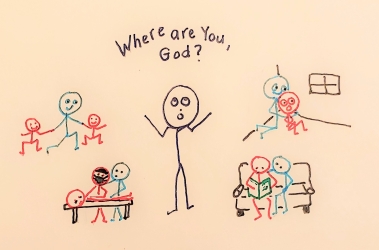 Where Are You, God?

I am here in the trenches

With the sickest people

And with those who care for them.

I am here in the nursing homes and hospitals

That are filled with anxiety and fear and worry

Bringing peace and comfort to those who let Me.

I am here behind the scene

With those who are fighting to find answers

Guiding and strengthening those who will listen.

Who feel all alone as they shelter in place

Offering companionship and peace to those who let me in

And don’t allow anxiety to squeeze me out.

I am here for the millions of stir crazy people

Who are struggling to get through each day

I am here to the masses of people

And I am here to the solitary person

Who feels abandoned, alone and scared about tomorrow

Offering love, friendship, hope, peace, and a place in My kingdom.

If only they’d let Me. 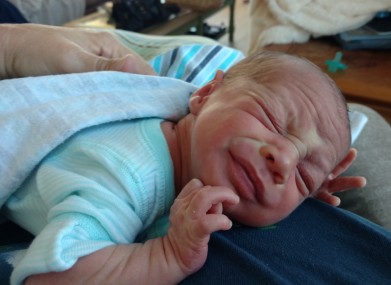 It’s so hard to watch you hurt as you struggle to grow. Your face all red and grimacing reveals the battle going on inside you. Your body is fighting to get rid of the things that don’t belong in there. Be strong, Little One, and let them go. I know it hurts sometimes but you don’t need them.  And you will feel so much better once they are gone. Can you feel my hand on your back, supporting and encouraging you? Probably not, but that’s OK. I’m here whether you know it or not. I’m not going anywhere.

2 Corinthians 7:1
Therefore, since we have these promises, dear friends, let us purify ourselves from everything that contaminates body and spirit, perfecting holiness out of reverence for God.

These letters have double meaning. On the surface they are letters I’m writing to my new granddaughter. But deeper down I hear God telling us the same things.  As you reread them, replace the greeting with your own name, and the closure with God’s name – and get to know the great love God has for you! 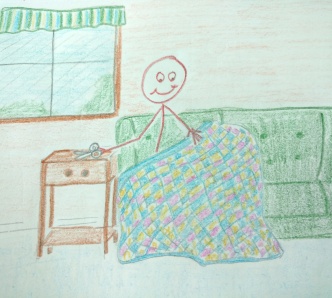 She sighed with satisfaction as she put down her scissors. Finished! It had taken awhile but the hand quilted comforter was finally finished. And just in time for her friend’s birthday. She imagined how cozy her friend would feel cuddled up in the large softly padded blanket. She didn’t usually make such an elaborate gift for birthdays, but this friend was special, as was this birthday.

She lovingly folded the comforter and tied it with a pretty red ribbon, then placed it carefully in a large gift bag. She couldn’t wait to see her friend’s face when she gave it to her in a few days.

She spent the next few days packing for her move out of state. Each time she passed the bag, sitting on the small table near the front door, new images formed in her mind…

…her friend, sitting on the couch, reading a good book and wrapped in the warmth of the comforter.

…her friend, sleeping peacefully on her bed under the cozy weight of the comforter.

…her friend, sitting in her bathtub seeking safety from a storm and surrounded by the softness of the comforter.

When the day came, she handed the bag to her friend with a huge smile, eager to watch her friend’s surprise and delight.

“Oh, wow! This is amazing!” her friend said, holding it up and admiring it. “I can’t believe you made this for me. It must have taken you forever!”

“It did take a while,” she answered. “But it’s well worth it. I wanted to give you something to treasure to remind you how much I treasure you and our friendship.”

“Aww… thank you. I feel the same way and I will treasure this comforter my whole life.”

Six months later, settled in her new home, she began missing her friend and decided to make a visit. Upon entering her friend’s house, she saw the comforter she had made. It wasn’t on the couch where it could be easily grabbed and used. It wasn’t on the bed waiting to provide warmth in the cool evenings. It was displayed on the wall!

“I love the comforter so much that I didn’t want it to get dirty or damaged so I put it on the wall. It looks great up there, doesn’t it!” her friend told her.

Hiding her disappointment, she smiled and agreed – it did look good up there. But it wasn’t made to be displayed on a wall. It was made to be used! To part of her friend’s everyday life. What good was it up there? How could it provide warmth and comfort from up there? But she knew it wasn’t her right to force her friend to use it the way she had purposed it. It belonged to her friend now and it was her friend’s right to choose what to  do with it.

On the way home, she sought the comfort of her Friend… and made a startling connection.

“Lord,” she prayed. “Thank you for Your gift of the Holy Spirit to be my comforter. Help me to allow Him to be part of my everyday life, to seek Him to comfort me when I’m scared and to warm me when I’m cold. May I never keep Him at a distance, knowing He’s there but not allowing Him to serve the purpose for which You gave Him to me.”

And she drove the rest of the way home wrapped in the cozy embrace of her Comforter. 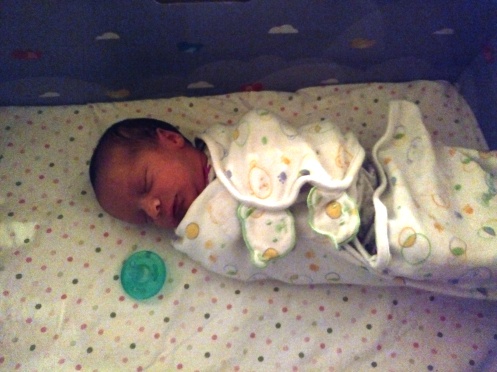 Wrapped up in gentle feelings of His love, we are quiet. The warmth and strength of his embrace gives us the security and comfort we crave.

But take that swaddling away and she becomes very restless. 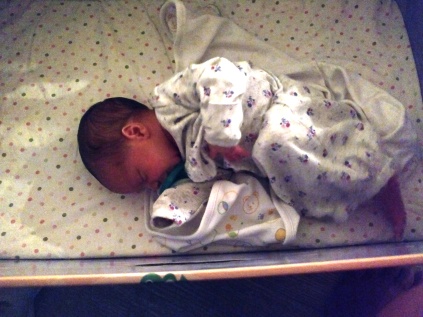 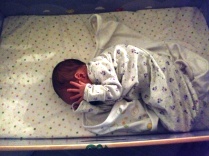 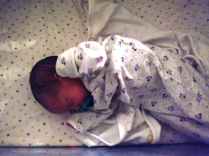 Eyes closed, she uses her arms to seek out the embrace she is missing. If only she would open her eyes, she would see that she was still being watched, guarded from danger, and loved.

It’s not the swaddling that keeps her safe and secure. It’s the one who wrapped her in it.

It’s not the feeling of God’s embrace that keeps us safe and secure. It’s the One who embraces us, whether we feel Him or not.