She remembered what Jesus had told His followers in Mark 13:11: “Whenever you are arrested and brought to trial, do not worry beforehand about what to say. Just say whatever is given you at the time, for it is not you speaking, but the Holy Spirit.”

But did that assurance apply to her in this circumstance? She was not the one on trial. And this certainly had nothing to do with her faith. She was here because of a custody battle over one of her students.

She didn’t know much about the family. The only time she saw them was when one or the other dropped off their son. They were both friendly in different ways and the child was a delight. She had no idea there were problems until one day when the mom had come in her classroom with a large bruise on her face. Tears streaming down her face, the mom had accused her husband of beating her and said she was going to divorce him. The mom had been concerned how it would affect her son and asked to be alerted to any changes in his behavior.

A week later she was served with a subpoena. And here she sat, waiting to be called before the judge to… say what? She didn’t know anything!

She had no idea what to expect and was terrified that she would be asked who she thought would make the better parent. How could she choose? Because she had seen the bruise on the mom’s face, she was siding more with the mom, and it had been the mom’s lawyer who had subpoenaed her  – but what if the story she had been told was not the whole truth? What if the mom was crazy and blaming her husband for something he didn’t do? After all, she hadn’t been there. And she had heard enough stories over the years to know things are not always what they seem. She was scared she would say the wrong thing and the cause the boy to go to the wrong parent.

“God, help me,” she pleaded over and over again. “Don ‘t let them ask me that question.”

“Don’t worry,” the mom’s lawyer had said. “The judge never allows that question. He knows teachers only have limited information.”

“God, help me,” she pleaded again, too nervous to feel His presence, or even to trust that He heard her.

Finally it was her turn. Facing the judge, the mom, the dad, and two lawyers was nerve racking just in itself. But then the lawyers started firing their questions until her mind was swimming. She got confused more than once and had to ask the dad’s lawyer to slow down. When she didn’t think she could handle any more questions, the dad’s lawyer asked her one more. “Who do you think would make the better parent?” She stared at him, then at the judge. Before she could say anything, the mom’s lawyer objected. He told the judge she wasn’t qualified to answer that because of her limited contact with the family.

The judge turned to look at her and said, “In my experience, teachers are pretty good at making intuitive judgments about their students’ families. I’ll allow the question.”

There it was. THE question. What could she say? She took a deep breath, then told the judge her impressions as the parents had taken turns dropping off their son in the mornings. “I don’t know who would make the better parent,” she said. “But because the mom always talked about her son, and the dad always talked about himself, I would have to choose the mom.”

All the way home, she kicked herself, remembering what she could of the interview, and realizing she could have done a better job. If only that lawyer hadn’t kept confusing her!

The next morning, when the mom arrived with her son, she hung her head and apologized to the mom. “I’m so sorry if I messed anything up.”

The mom shook her head. “No, you don’t understand. Your answers were perfect!” She handed a pencil to her. “Thank you so much!”

Atop the blue pencil was a large rubber eraser, shaped like a sun, with the words “God’s Love Shines On You.’ 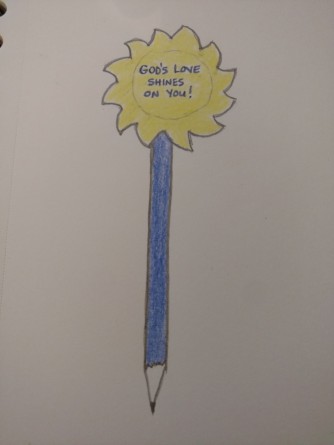 And she knew that God has sent that pencil to her. It was like getting a hug from Him, assurance that she had done a good job regardless of her fears. Not that she believed for a minute that her answers were all that wise in and of themselves – but the Holy Spirit had guided her in what to say, and God had used it for His purpose, standing behind her and filling her words with His power and light. And that’s what everyone else had heard. Just like He had promised in Mark 13:11.

What an amazing, faithful God!