The sidewalk was crowded as Bella made her way down the street. As she walked, she watched the people. Most of the people were not paying attention to anyone else as they hurried to their destinations, not even slowing down as they bumped into fellow travelers. A few people were looking around, lost in the sea of bodies. Even fewer were the people who were actually smiling and trying to make contact with anyone who looked at them.

Bella felt alone in that crowd of people. Everyone, or at least most of them, seemed to know what they were doing and where they were going. Bella knew neither. Full of sadness that she didn’t understand, she walked through the throng trying to avoid being bumped and jostled.

Bam! Without warning, she was knocked flat to the ground. 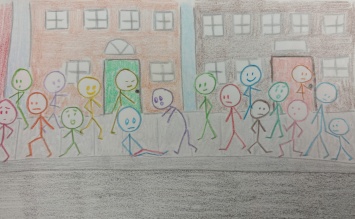 “Hey, are you OK?” Bella looked up to see a lady rushing towards her.

“Yeah, I’m fine.” She said, trying to brush the lady off. She didn’t need anyone’s help. But as she tried to stand, pain burst through her right hip. She looked down and saw that her entire right side was blood red.

“You ARE hurt,” the lady exclaimed, leaning over her. “Stay down. I’m going to call for an ambulance.” The lady touched her cell phone and groaned, “My battery’s dead. I’ll go find a phone. Be right back” and ran off towards a nearby store.

Bella didn’t wait for her to come back. She didn’t want her help. She was sure she was OK. Maybe a bit bruised but nothing to make a fuss over. Not near as bad as the pain inside her. She managed to get on her feet and began limping in the other direction to avoid the lady seeing her. Up ahead was a church. Perfect. she could hide in there. She really didn’t want to deal with that lady’s insistence that she needed help.

As she limped towards the church, she noticed her limp was getting less pronounced. See, she thought with justification, I’m fine.

Opening the front door to the church, she was surprised at how big it was. Much bigger

on the inside than it looked on the outside. She was in a large foyer. Several tables were scattered around, most with pieces of paper on them. There were signs   directing church goers to the bathrooms and exits. And in the center stood an indoor fountain. As she limped towards the fountain, she noticed several doors along the back wall. Thinking they might provide a better place to hide, she tried them. The first door went into the kitchen. She peered inside. Empty. She could hide here, but no, it was too close to the door and if that lady had seen her enter the church, it would be the first place she’d look. Bella needed to go deeper into the church.

Opening another door, Bella saw a long hallway with many more doors. Even though she wasn’t limping as much as she did at first, her hip still hurt and she didn’t feel up to trying a bunch more doors that may or may not provide a suitable hiding place. So she closed that door and opened the third door. It looked like a living room. The preacher’s private quarters? She didn’t see anyone so she decided to sneak in there to hide. If she was quiet enough, no one would know she was there. And maybe she would be lucky enough to find a back door leading to a different street where that nosy lady wouldn’t think to look.

As she made her way slowly across the living room she noticed there was indeed a doorway in the back. It looked like it led into a hallway. She shifted her course slightly and headed towards it. Just before she got there, she heard a voice.

She froze in her tracks. Should she make a run for it? But she was already across the room from the door, and there was no telling where the hall would lead.