Bella looked around fearfully as she fled home. Her mind was racing as fast as her legs. If Pastor Toby was an alien… wait. Forget the if. Pastor Toby IS an alien, she corrected herself. So does that mean there are other aliens here too? And what about Pastor Toby’s enemy?

As she ran, she looked at the other people on the sidewalks.

She saw a couple walking past, holding each other’s hands and talking quietly together.

They’re aliens. They’re talking about you. The thought almost made her stop. Why would they be talking about her? Probably because she escaped from Andy. He must have contacted his leader, and now everyone is going to be looking for her. She began to run faster. 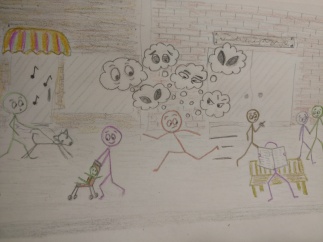 She passed a man reading a newspaper at a bus stop.

He’s an alien too. He’s just pretending to read that paper. He’s actually watching you. She couldn’t resist turning her head to see if he really was watching her. Nope, he hadn’t moved. He hadn’t even shifted his head. Where were these thoughts coming from?

She ran by a man who was looking at his watch. Was his watch really a communicator. Was he reporting on her location?

She saw a lady pushing a stroller. Were there baby aliens too?

She looked at a girl walking a small dog and whistling. Whoa! Bella had a new thought. Was the DOG an alien? What if aliens not only took on human form, but also the forms of animals? Maybe even insects?

Was she surrounded by aliens? She felt eyes watching her from every direction.

Bella tucked her head down and hurried faster. She had to get off the street. She had to get to the safety of her apartment where there was no one but her. She couldn’t trust anyone or anything anymore.

Finally she made it to her apartment, closed and locked the door, ran to her bed, climbed in, and pulled the covers over her head. If she lay real still, maybe they wouldn’t find her. Trembling and breathing hard, she tried to listen for any sounds of pursuit. Now that she knew they existed, were they going to come for her? Surely they wouldn’t just let her go free. What if she revealed their secret? What if she talked to a newspaper or TV reporter? Then a depressing thought slowly filled her mind. They didn’t need to pursue her. She was not a threat. Who would believe her? If she tried to tell anyone of their existence, they would just think she was crazy. She would probably end up in a mental institution. At the very least she would be laughed at and ridiculed.

Bella lay in her bed, no longer fearing an invasion, but too distraught to get up. How could she go back to everyday life? It was like she had been going through life with her eyes closed, and now they were opened to a whole other reality. No matter where she went – work, shopping, the gym – she would be wondering how many of the people around her were aliens.