Bella paced in her small apartment. She wanted to go, but then, maybe she didn’t. What if that had been a onetime thing? What if they weren’t happy to see her again? Worse, what if it had all been her imagination?

She remembered the kindness in their eyes. Kindness and love. No one had ever looked at her that way before.  And her heart was crying out for another encounter with that love.

After leaving the church, she had gone straight home. She hadn’t wanted to talk to anyone until she had had time to process her experience. What was that place? Who were those men? How could such a thing even happen?

Not finding the answers inside herself, she began searching on line and reading everything she could find on churches that are bigger on the inside. She was amazed at how many references there were to that.  And how many opinions there were about it – from awe such as she had felt to passionate condemnation, and everything in between.

How was she ever going to find out the truth?

“I’m just going to have to go back,” she thought as she paced.

You don’t want to do that.

She stopped as a new thought entered her mind. The thought itself wasn’t too bad, it was the fear that accompanied it that made her pause. Maybe I don’t want to go back there. Maybe they won’t be the same. Maybe they won’t even let me in the door. After all, I had trespassed that day. They might be angry at me, now that they’ve had time to think about it.

And they’ll force you to talk about Disneyworld.

Fear continued to build in her as she thought of Pastor Toby’s question about Disneyworld. What if he tried to get her to talk about it again? What if he wouldn’t let her go until she did?

Shaking now she decided not to go back. Ever. Not knowing what would happen, she couldn’t take the chance that things wouldn’t turn out so good a second time.

That’s a smart decision. You are so wise.

Feeling self satisfaction creep in, replacing the fear, she tried to ignore the cry in her heart. Her heart had led her wrong at times. It was her brain, her intelligence, that she needed to rely on. And her brain was telling her the wise thing to do was to forget about the church.

But way down deep inside, she could hear another voice.  One calling to her heart as if responding to its cry.  “Come back,” was all it said. But it was enough.

Undecided, she stood in the middle of the room.  What should she do? Should she chance returning to the church? Or take the safe road and stay home? 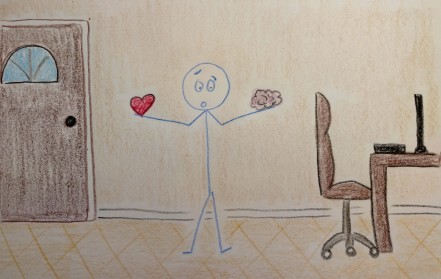