“I’m OK. Really,” Amanda tried to convince the man holding her arm while trying to pull away from him.

He let go of her and said. “I know you’re upset. I can see it in your face. Want to go to Waffle House and talk?”

Amanda looked from him to the Waffle House a couple of blocks away then back at him.

“We can walk. By the way, I’m Andy. I’m one of the assistant pastors here.”

“Nice to meet you,” Bella said politely, hiding her surprise. This  young guy was an assistant pastor?

“So?” he asked as he motioned towards Waffle House.

As they walked past several closed stores, he apologized for the bulletin lady’s behavior. 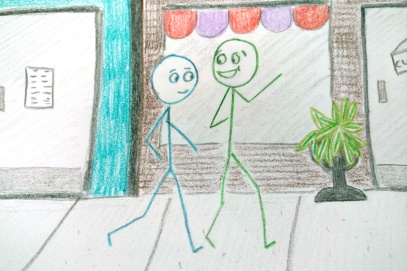 “She’s not always like that.” He said with a twinkle in his eyes. “Sometimes she’s worse. She must like you.”

Amanda smiled as she gave him a sideways glance.

“Worse? I guess it’s a good thing she likes me then.”

He seemed warm and genuinely concerned about her just like Pastor Toby and Jude. But was he really an assistant pastor? He didn’t look any older than her, which seemed kind of young to be a pastor already.

“Is this your first visit to our church?” he asked.

“No, I’ve been here before but not when there was this many people. This was my first service.”

“What? Is that a slogan you saw written somewhere?”

“Actually, it’s kind of in our church’s mission statement.”

“Do the church members know that?”

“I’d rather not talk…” she began but he stopped her.

“It’s OK if you don’t want to, but I’ve found that talking usually helps.” He smiled at her. “And I’d really like to know what people think when they visit us.”

“Well, it’s just the people seemed to be… opposite of Pastor Toby.”

“Pastor Toby is so nice. I always feel like he wants me here.  But when I was in the lobby, it was so crowded and most people seemed to be too busy with each other to notice me. And each time I did get noticed, it turned out badly.”

“I don’t know. I think tripping me turned out rather nice.” His eyes twinkled again. “At least it did for me.”

She smiled back. “I wish they had all turned out that way.”

“So, what happened that turned out badly?”

Bella didn’t know how to answer that without revealing how stupid she had been. Had she really asked Amanda if she was being led by an alien? Of course Amanda would have thought that ludicrous. Aliens didn’t really exist, did they? And if, by some long stretch, they did, and, if Toby really was an alien, he’d probably not want anyone else to know. Either way, Bella’s question would have sounded totally bizarre, and she wasn’t about to repeat that mistake with Andy.

“Well,” she hedged. “I had some questions and there was a lady who offered to answer them. We were talking over coffee, and then… she had to leave. And I think… I’m pretty sure… she was talking about me to some other people in the kitchen. I heard them laughing.”

“What makes you think it was about you?”

“Maybe it wasn’t about you at all. But I’m sorry you thought it was. That must have embarrassed you.”

Bella nodded. “I did feel bad. And when I tried to leave I kept bumping into people, who weren’t too happy about it.”

“People can be a bit self-absorbed at times. They often don’t realize what they’re doing. But I apologize for them, too.”

“So,” he said as he held the Waffle House door open for her, “do you still have questions?”

“Well, actually, I do.” Bella entered the restaurant, looked around, then pointed towards a booth nearest the door. “How about that booth?”

They sat down opposite each other, gave their drink orders to the waitress, then studied their menus.

“Order whatever you want,” Andy said. “My treat.”

Bella looked up surprised. “You don’t have to.”

“Nice name,” he said, still smiling. “Do you know what it means?”

“Which fits you well. But it’s also Hebrew and means devoted to God.”

“Which doesn’t fit me at all. I don’t know if I really believe in God. I’m certainly not devoted to Him.”

“At the moment, but that can change.”

Bella eyed him. He didn’t ask her here to try to convert her, did he? That would make this brunch awkward as she had no intention of going down that road. Her questions were about Pastor Toby, Jude, and this church. Not about God.